April 20, 2020—RIVERSIDE, CALIFORNIA—Compared to what many others are predicting, a new presentation from prominent economist Christopher Thornberg delivers a more optimistic assessment of the long-term economic impacts that could result from the worldwide COVID-19 crisis. In the video presentation, released today by the UCR School of Business Center for Economic Forecasting and Development, Thornberg argues that many of the most dire predictions of economic armageddon are hyperbolic, although he acknowledges a number of serious wild card issues that could tip things downward.

While underscoring the uncertainty surrounding the timeline for activity reopening, Thornberg gave a baseline forecast for the U.S. economy that has GDP growth at 0% in the 1st quarter and -25% in the 2nd, after which the 3rd quarter will surge to 20% and the 4th quarter settle down to 5%. This is based, however, on significant economic activity resuming by the end of May.

“If the extraordinary health mandates that have been put into place do indeed control the spread of the virus over the next four to six weeks – and we are seeing that happen in other countries and in parts of the United States – then we expect things to come roaring back in the 3rd quarter with only mild long-term damage,” said Thornberg who is Director of the UCR Business School’s Center for Economic Forecasting. “Part of our optimism centers around the fact that this unprecedented crisis is not hitting a fragile economy, but a sturdy one that was fundamentally sound when the problem started.”

The UC Riverside School of Business Center for Economic Forecasting and Development is the first major university forecasting center in Inland Southern California. The Center is dedicated to economic forecasting and policy research focused on the region, state, and nation. Learn more at https://ucreconomicforecast.org. 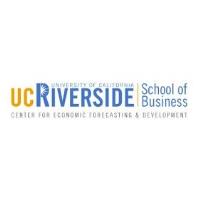